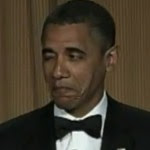 Barack Obama opened White House Correspondents Dinner – an annual chuckle-fest with D.C. reporters and pop culture celebrities – with a pair of jokes and a wink about his supposed Hawaii birthplace.

He began with more veiled joke alluding to April 28 of last year, when the White House released to the press a copy of his purported long-form birth certificate, a move prompted in part by calls from Donald Trump to see evidence of Obama’s eligibility to be president.

“My fellow Americans, we gather during a historic anniversary,” Obama said. “Last year at this time, in fact on this very weekend, we finally delivered justice to one of the world’s most notorious individuals.”
Posted by Stendek at 4:19 PM No comments: Posted by Stendek at 9:29 AM No comments: