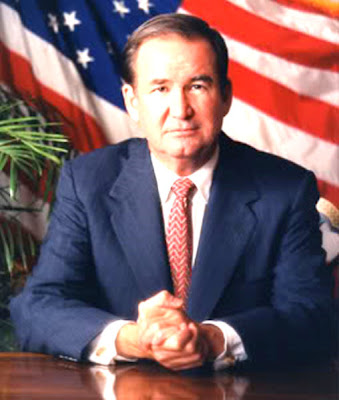 Patrick Buchanan wrote that it was the “incessant clamor from the left” that resulted in his removal as a political analyst from MSNBC.

But as a recent interview with RT shows, it is not Buchanan’s supposed “white supremacist ideology,” as Color of Change ludicrously charged, that got him fired, but his common sense views on U.S. foreign policy, views that often intersect with the views of another pariah and thorn in the side of the establishment, Ron Paul.

As the drums of war grow stronger, the establishment media, including a supposedly liberal establishment, are purging their ranks of critics like Buchanan. In a normal, non-Bizarro world, Ron Paul would be an ideal candidate for antiwar Democrats.

As Patrick Buchanan notes, what happens in Iran and Syria is none of our business and it certainly does not endanger our national security.

How is it, Buchanan muses, the U.S. is worried about non-existent nuclear weapons in Iran?
Posted by Stendek at 6:26 AM No comments: