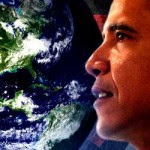 President Obama is vowing to make the case for action on global warming during the 2012 campaign.

“I suspect that over the next six months, this is going to be a debate that will become part of the campaign, and I will be very clear in voicing my belief that we’re going to have to take further steps to deal with climate change in a serious way,” Obama told Rolling Stone magazine in a newly published interview.