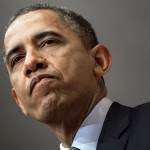 Today’s New York Times offers a stunning revelation for anyone who hasn’t been following the news out of Washington for the past three years: President Barack Obama is bypassing Congress and using his executive authority to unilaterally implement his policies of choice, irrespective of the will of the people.

The Times cites an episode last fall when the president declared in a White House meeting “that the administration needed to more aggressively use executive power to govern in the face of Congressional obstructionism.”

And so was born the president’s “We Can’t Wait” slogan, which has become a mantra for the Obama Administration’s unilateral form of governance.

The Times overlooks the fact that the president’s “new” slogan had been conceived and implemented well before last fall.
Posted by Stendek at 9:40 AM